About Glendale and the London Borough of Lewisham

Glendale and Lewisham Council started working together over two decades ago. It was back in 2000 that the two parties came together with the sole aim of revitalising Lewisham borough’s green spaces.

With the success of this initial venture between Glendale and Lewisham Council, the Greenspace Maintenance and Management Contract was started in 2010. Enabling Glendale to provide Lewisham Council with a complete-care package, this then allowed both parties to work together toward achieving a safer, greener environment for everyone in the Lewisham Council area.

Glendale provides the complete management of 53 different parks across the London Borough of Lewisham, and this includes the end-to-end management of the Green Flag process. To highlight the excellent work done by Glendale over the years, their together with Lewisham Council has resulted in achieving over 180 Green Flag awards since 2002.

As 2020 began, pre-COVID, Glendale was planning for another successful year working alongside Lewisham Council but of course, everything came grinding to a halt in March. Naturally, this presented a set of unique challenges for Glendale’s teams working in the London Borough of Lewisham.

42 of the 53 parks that are managed by Glendale have playgrounds and 3 of those 42 parks have 2 playgrounds. In a pre-COVID world, these would have been open to the public as normal, many of the parks across the Lewisham Council area would have seen a steady flow of visitors enjoying the well-maintained areas the teams upkeep on a daily basis.

After the announcement of the UK lockdown on March 23rd however, things changed, which presented different challenges for the park’s teams across the Borough.

With the weather getting warmer and following Government guidance around daily exercise, naturally the parks became much busier than we would normally expect. This required Glendale’s Park Services teams to be responsive and adapt to things very quickly. Awareness of all the new ruling that had been introduced was paramount to continue to work to their high standards whilst adhering to the new rules and ensuring the public were also playing their part in keeping socially distanced while in the parks.

At a moment’s notice, Glendale’s Park Services management team were required to provide PPE and hand sanitiser to the Park Services teams to ensure theirs and the public’s safety while they were going about their daily duties.

The parks themselves remained open but facilities such as, the park toilets, any outdoor gym equipment, tennis courts, playgrounds, football courts required the appropriate action which in this instance was often taping, padlocking, and putting up barriers with appropriate signage making it clear that these areas were strictly off-limits to the public to use.

The increased number of people in the parks presented a unique challenge in itself. At times during the summer, every day was like a Saturday which is usually the parks busiest day in the summer holidays. However, due to colleagues working together and the quality of prior training, ensuring all social distancing measures were enforced and working closely with the police to report any breaches in social distancing such as large groups mixing together occasional challenges to rule enforcement was avoided.

Naturally, during the last 12 months, there has been a lot of added responsibility taken on by members of the Glendale Park Services teams across the London Borough of Lewisham.

They have all worked together and have been quite open with each other about how they’ve felt part of something special, whilst recognising the job that they have to deliver, not only for Lewisham Council but also for the general public at a time of national worry.

Grzerogz for Glendale says:
“This is something that stands out about all of our teams here at Glendale, it’s like a family. From all over the borough, our teams have pulled together, management and supervisors as well, and have contributed to the cause. It’s very much been a team effort, from top to bottom, and having that family feel has only helped matters in uncertain times”.

One final thing as part of our work with other agencies and local authorities, especially Lewisham Council, we’re incredibly proud to be able to say that we donated several different PPE items to local hospitals and the NHS during the initial shortage of PPE at the start of lockdown. 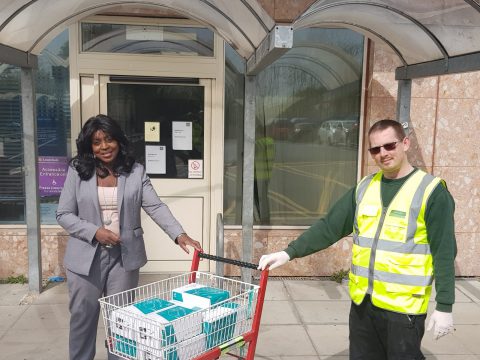 Overall, the reaction from the general public to the work being carried out in the 53 different parks throughout Lewisham, has been overwhelmingly positive.

Darren Budden – General Manager at Glendale says;
“Seeing the work done by Glendale’s teams and working alongside the general public has resulted in the green spaces that people have on their doorstep becoming more widely used and we’ve had feedback that as a direct result of our Park Services teams, people will continue to make use of them whatever measures are in put in place for outdoor use in the long term.”

We’ve been in almost daily contact with council representatives and this has helped us no end to be able to continue to do our jobs, but clear communication has also ensured that every part of every team knows what’s going on, when and how we can achieve what we needed to achieve in a timely, efficient and safe manner.

We are incredibly proud that we have been able to donate masks, gloves and goggles to local hospitals and the NHS. Also, as a result of working so closely with the number of different authorities, we’re honoured to have been asked to feature in a thank you video to the NHS along with many other local business and organisations.

Here at Glendale, we approached two of our clients with the idea of installing litter-picking billboards in their regions to ensure that their parks a...

Vegetation management on the Juliet Bund

Read full story
View all
We use cookies on our website to give you the most relevant experience by remembering your preferences and repeat visits. By clicking “Accept All”, you consent to the use of ALL the cookies. However, you may visit "Cookie Settings" to provide a controlled consent.
Cookie SettingsAccept All
Manage consent